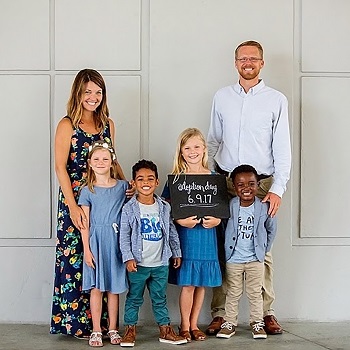 Luke, Jenny and their two daughters, Ellie and Kira, began their fostering journey with Place of Hope about five years ago. They adopted their second placement, Jax, after having him in their home for more than a year. Luke and Jenny then had a seven-week-old boy placed in their care for almost nine months. That little boy was eventually placed with a family member. Luke and Jenny felt as if they were grieving the loss of a child. However, they trusted in God’s plan for them. Jenny said in her blog, “If a foster child could experience the chance to be loved, no matter how long they stay with us, we want to be willing to do it. Because what these children stand to gain is far more valuable that what we may lose in the process.” Shortly after writing this, Jenny and Luke met two-year-old Aiden while he was already placed with another family. Circumstances changed and another foster home was needed for Aiden. This was his sixth placement. He was traumatized, scared and hurting. He had behavioral issues and anxieties from being moved around so much. Since Luke and Jenny already had a relationship with him, they took him into their home. Seven months later, Aiden was eligible for adoption. Luke and Jenny were asked if they were interested, and they said “yes!” In April of 2017, Aiden’s case came to a close, and on June 9, 2017 the family grew to six members. Luke and Jenny changed Aiden’s name to Josiah which means “God has redeemed.” They are so happy to be his forever home. Josiah now has a big brother, Jax, who is excited to have a buddy around and two older sisters with big hearts. They were more than willing to share their Mom and Dad. We are so glad Josiah has a family and a safe place to call home! Watch their story of hope here.