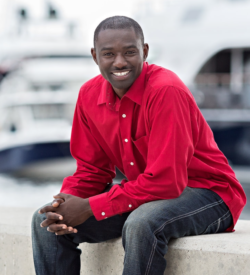 Samson and his younger sister came into Place of Hope’s care when they were teens due to violence in their home. Samson’s football coach had noticed a change in his behavior and appearance, which lead him to look into Samson’s home life. Throughout the transition, Samson couldn’t help but worry about his sister and felt anger towards the people that hurt them. He said, “My sister was my number one concern and I wanted to make sure she was safe.” After a few months in our care, Samson said he began to like his life again and felt more open about sharing his story. He attributes his emotional growth to the staff and cottage parents that diligently poured into him. He also went through our Villages of Hope program and learned necessary life skills that prepared him for the future. Samson is now married with three beautiful children, a homeowner and a manager at Publix, a job he first started at while living at Place of Hope. He is also actively working on obtaining his real estate license with plans to start his own company.