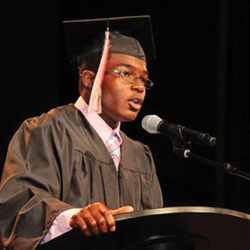 Growing up, Will and his brother were forced to live in motels and bounced from one abandoned home to the other after their mom lost her job. In 2008, the boys were brought to Place of Hope. Will was given a scholarship to Jupiter Christian School where he played football. He also developed a relationship with the Tiano Family through mentoring with Sal. They formed a strong bond and Will soon became a cherished member of the Tiano family. Will graduated from Southeastern University in the spring of 2019 and has grown into an exceptional young man. He graduated with his Bachelor’s degree in social work in hopes of helping young people like himself. He often visits the Place of Hope campus and helps mentor some of the boys in our care. Watch his video of hope here.